This site has now moved here:

Tangra Tower: Living in the Spirit of.....
ast year when my good buddy, climbing partner & fellow adventurer “thee Cory Hall” passed awayL in a tragic climbing accident whilst on a motorbike-Pan-American climbing odyssey: I knew a memorial expedition with friend (and also Cory-partner), Max “the bear” Fisher was in order. Cory was, and still is, an inspiration to many, not only in his impressive climbing career, but also in his care-free, fun loving, and adventurous life style. 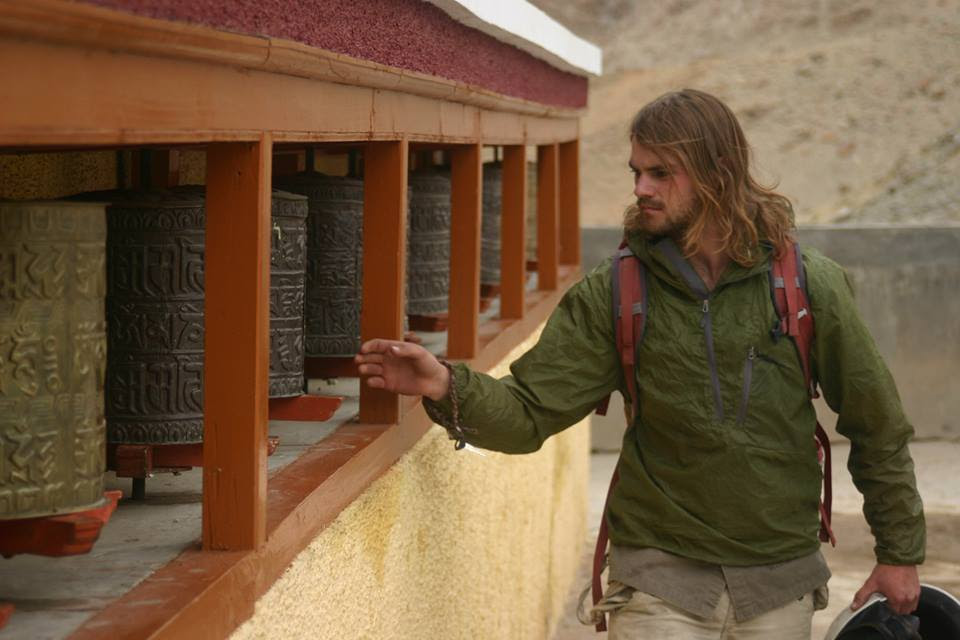 Cory Hall spinning Buddhist prayer wheels in Ladhak, India
© James Monypenny
The granite spires of Pakistan have been a long held dream, for Cory and myself: and I wanted to forge an uncompromising line, in good style, up a remote, untouched spire, in a rarely visited valley. Tangra tower fitted the bill perfectly. After months of research, fundraising and preparation; the stage was set for a true adventure.
Why 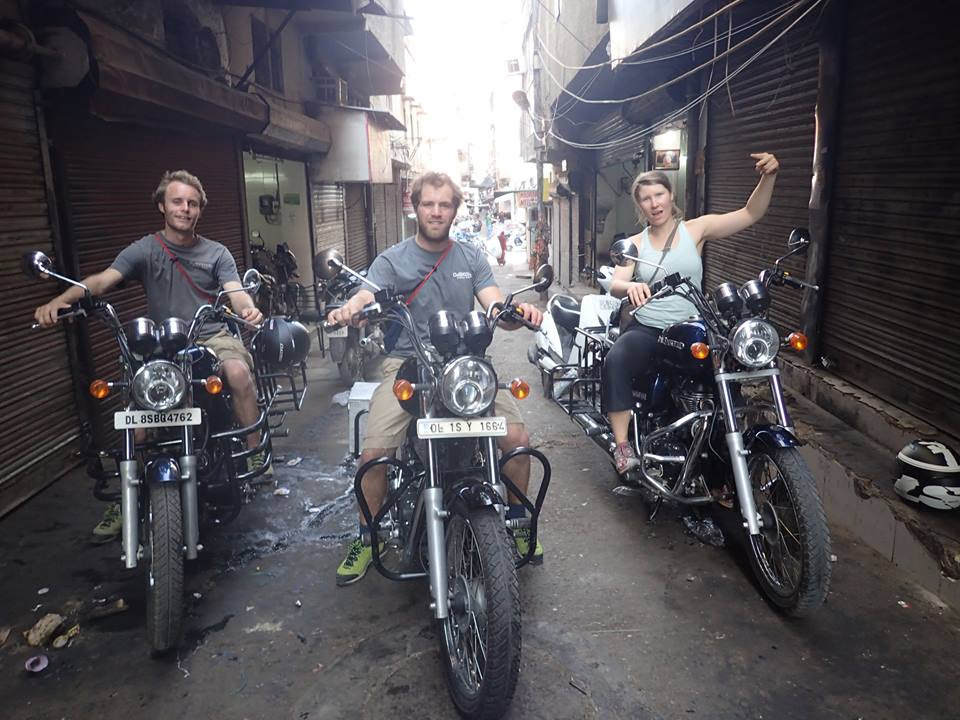 not learn to ride a bike in India?
© James Monypenny
Early in September we met in the chaos & humidity of Delhi, bought royal Enfield motorbikes, and learnt to ride in the deep end. After three days of dodging traffic and cows through the foothills of the Himalaya we reached the Pakistan-India boarder. Try as we might, we were unable to bribe the bikes into Pakistan, and continued by public transport, up the infamous Karakoram highway.
In Skardu we bought supplies for a one month stay in the Khane valley. Entering the valley the psych was running high, surrounded by alpine & big wall objectives, with so much to choose from. However fate had other plans. After a reccy on our first day, we spent the next 9 days pinned at base camp whilst around a foot of snow fell, and I suffered badly with Gardia.

Serac climbing on twin peak 2
© James Monypenny
On day 10, only partly recovered, we moved our heavy big-wall kit into the base of tangra, however we were going to need allot more sun to melt all the fresh powder on the lower slabs. Instead, we opted to acclimatize on the alpine-style objective of “twin peak 2”. The endless trail breaking through knee deep snow finally gave way to some great ice climbing. Taking the short-cut straight up serracs yielded good ice and less slog. A huge spindrift avalanche ripping down the tasty-looking chimney we were aiming for meant we had re-think, and romped-up an alternative couloir. We were initially slowed by powder snow sat on brittle ice and loose rock slow, then after a few hundred meters we re-joined our line, and were rewarded by 400 meters of excellent ice conditions.
Max following on the lower serac pitches 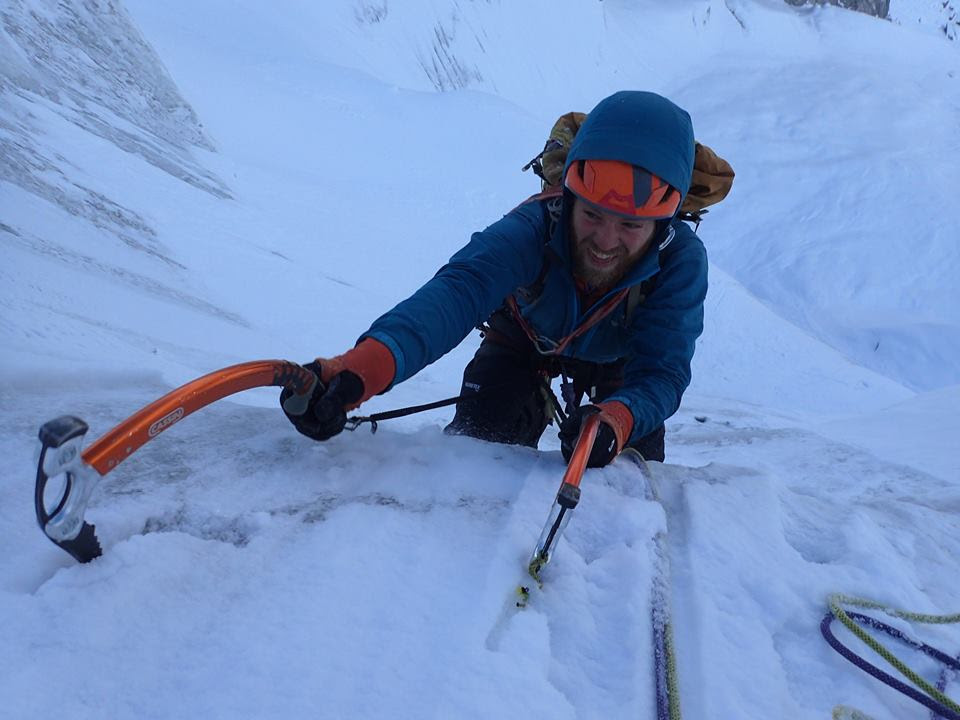 © James Monypenny
In hindsight, after moving together for so long, and Max mentioning his fatigue, it was unwise not to take a break and refuel at this point. Pushing onward, we reached around 150m from the summit. However Max was done, unused to the altitude and un-acclimatized, a deep fatigue had set in. Our rap-down through the night went reasonably well, and we stumbled back to our advanced camp after 20hours on the go. 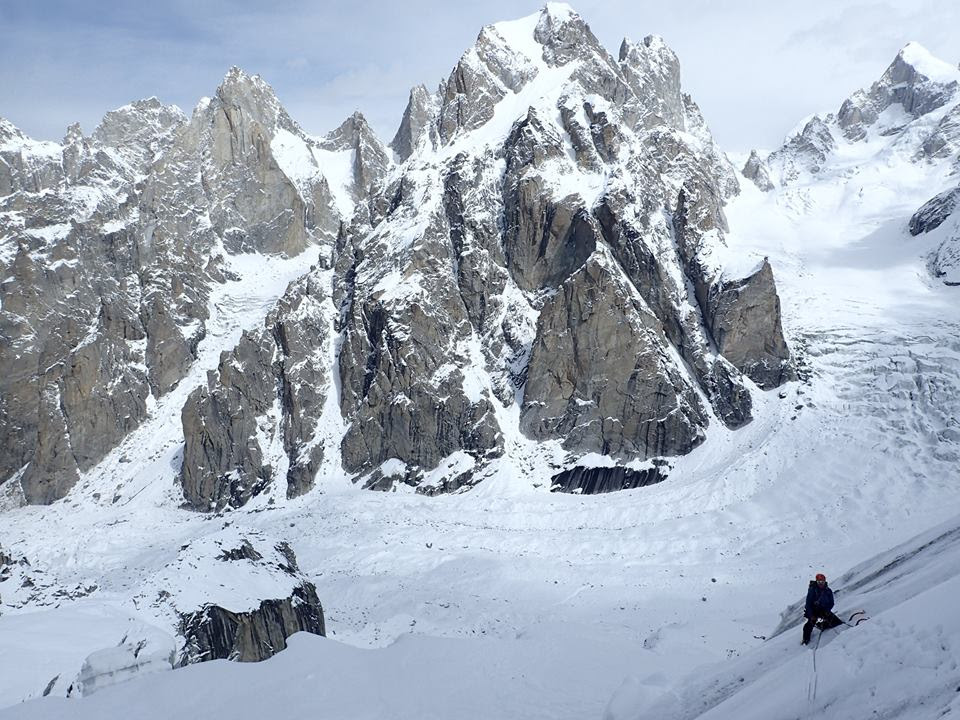 Just after the bergschrund
© James Monypenny
The following day high pressure arrived, and we enjoyed blue skies on the painful stumble back to base. Just as good weather arrived, max’s psych departed. Unfortunately the waiting game had taken its toll, thankfully he was willing to give Tangra an attempt.
Day 3 on the wall 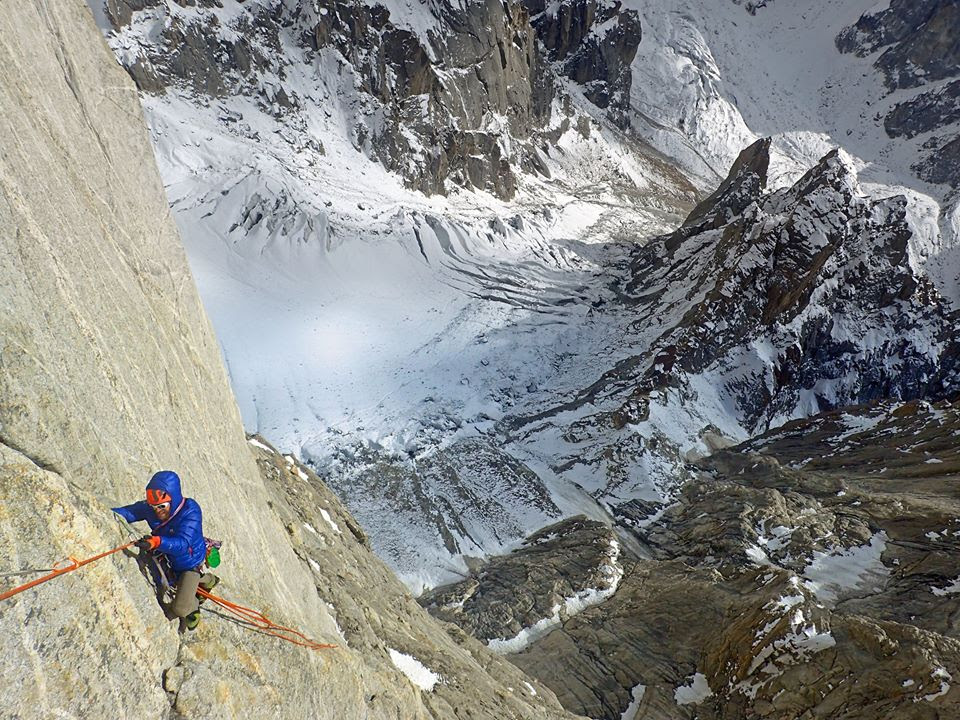 © James Monypenny
After only one full day at BC we returned to Tangra, collected water, and got established on the wall. I lead up the lower slabs. Dirty, gritty, rounded cracks would finish abruptly, and I would continue into the unknown: hopeful. Friction combined with 30kg of water did not make hauling any fun, not that it ever is. Camp 2, in our orange ledge, produced almighty views, the rising and setting sun helped to re-warm Max’s psych, just a little. And he got stuck into some slow going awkward aid on pitch 1 of day 2. Several pitches later snow flurries and unprotected moves halted my upward progress and we set up camp in an awesome position. 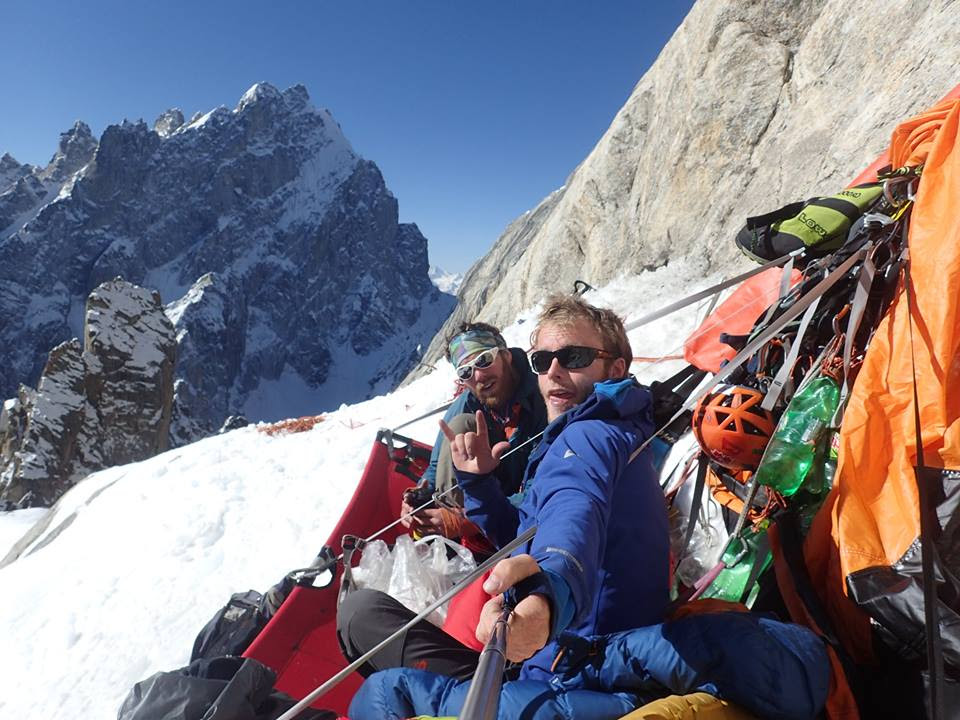 © James Monypenny
Linking the grey bands on the morning of day 4 we reached the upper head wall. Wild splitter cracks, which took a mixture of free, aid and pendulums to proceed, led us to the chimney pillar, where we spent the night. After an hour of trying to get the stove going, using cheap Asian lighters, we succumbed to a depressing meal of dry noodles. Searching every pocket I found three matches, and we could continue to eat and melt snow for one more night, however lack of gas forced us to make a summit attempt on day 5. This did not go well. After taking two hours to achieve twenty metres, due to horrendous off-width climbing, loose rock, and tricky aid, I had to admit defeat. Despite the tips of my fingers being painfully split, my body tired, my motivation to keep going up was high, but this didn’t change the fact we were out of water and gas, going down was the only logical choice. 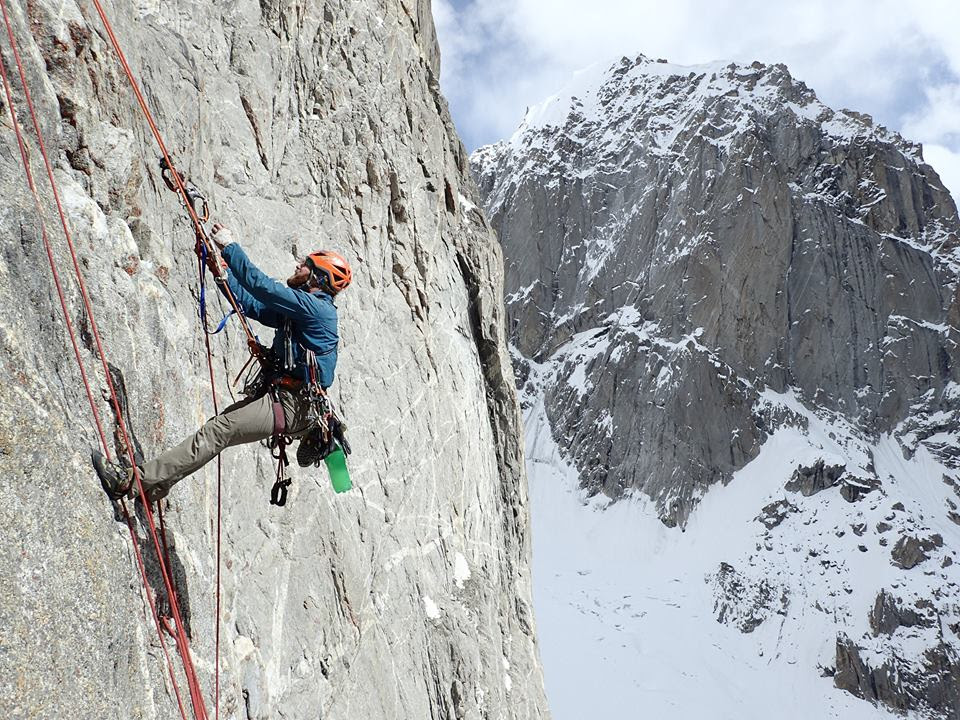 Max jugging
© James Monypenny
We managed to get down leaving behind mainly just tat around spikes. This time, having done the majority of the leading, it was my turn to feel the deep fatigue. Stumbling, for the last time, back to base camp, the weather remained mockingly good. Tangra put up a great fight. It’s the unknown that beckons us back to the alpine, time after time. In this case there was no certainty of success, so many challenges to overcome. Whilst we didn’t overcome them all, and we didn’t stand on a summit, the trip was a success, because coming home to friends and family is the most important objective.
Tangra will still be there, and I will be back. To my friends and family: thank you for your support, & sorry for the worry that my self-indulgent sport inevitably causes.
We would also like to thank Mountain Equipment (for supplying clothing), Lowa (for supplying footwear), Mountain Equipment Coop Canada (for supplying the portaledge and haul bag), V12 outdoors (various items of equipment), as well as the British Mountaineering Council, the Mount Everest Foundation, & Gore-tex for supporting the expedition fina

Posted by James Monypenny at 05:32 No comments:

DofE Silver The story of the first ascent of the NW face & NE ridge of Mt.Emily, by James Monypenny


I am by myself and climbing alone, on an icy face of an unclimbed mountain in the Pamir range of Tajikistan. It’s about 5am, the sun is yet to rise and at the limit of my vision, looming ominously several hundred metres above, somewhere in the darkness is a large serac band, the dangerous ice cliffs threatening and menacing. I wouldn't normally be willing to climb under such objective danger, but in this particular basin its actually one of the safer lines, nor would I normally be climbing alone, but on this occasion, having had my partner bail early on, I’m very glad for the extra speed afforded. The less time spent belaying and placing screws will mean less time under the dangerous seracs. I traverse rightward, weaving my way through a maze of bergschrunds with fading light from my dim head torch. As the sun begins to turn the horizon from dark black to ocean blue the wall kicks back to roughly 65 degrees. The softer snow runs out and I am left climbing cautiously up brittle black ice. Whilst I have spent a lot of time soloing on rock, and a lot of time roped on ice, this is first time I have soloed something technically involved on ice. Surprisingly I felt confident and quite safe. Occasionally the ice would facture quite badly so I took care to place each tool well and slightly further apart than Muzkol 2015 Expedition - Tajikistan - Page 17 normal. As the horizon turned a mixture of pinks and orange I begun following a thin strip of neve, wrongly thinking it was thick enough to ease my upward progression. This mini strip of neve leaned slightly leftward, taking me further from my intended course, and gradually steepening. As I ascended, and day fully broke, the convexities of the slope revealed the challenge ahead: a long (perhaps 500m) traverse on black ice. The thought of traversing un-roped, on black ice, for so far, was draining. I began this process by doing a series of horizontal abseils: I would ab the full length of the rope, traversing as far as possible, lock off, then ascend up wards and rightwards. After repeating this process several times I realized that it was neither enjoyable nor very fast. And so I decided on a complete change of route plan and followed a direct line up to the ridge. Emerging onto the ridge and into the sun I felt a sense of relief, knowing that most of the technical climbing was behind me. However there was still allot of ground to cover and it didn’t look easy. I left behind a jacket and my rope and skirted under the large rock buttress. The terrain was now at an easier angle, perhaps 50 degrees, but a dangerous 50 degrees. Patches of hard ice lay hidden, waiting to trip a tired climber, not allowing me any respite. Then began the slog: 50-60 degree snow and ice for perhaps another 1000m. Muzkol 2015 Expedition - Tajikistan - Page 18 I got down to business. After taking a short rest to re-fill my water bottle from a drip I set off and ten minutes later a volley of falling stones passed by my rest spot. At around 5000m I heard a trickle from the snow, could it be? I dug down and sure enough I eventually found a small stream of replenishing glacial water. The final summit ridge was around 500m long and a balancing act between the large cornice to the right, the avalanche prone slope to the left, and the occasional crevasse. Around fifty meters from the summit I knew that all the difficulty and dangers were over and I suddenly looked around. It was as if the previous mental stress and intense focus had blinded me. Because surrounding me now, was an indescribable view. Himalayan giants filled the vista. My sudden appreciation for the beauty of the scene was over whelming. My mind was filled with a kaleidoscope of emotions. Initially it was the sheer awesomeness, the thought that I was, more than likely, the only person on the planet experiencing this incredible view. Then a feeling of loneliness. The feeling that this incredible beauty should be shared and that whilst alone such experiences are special, but that no-one else can ever understand unless they are with you, having that same experience.
Emily reports on the entire trip here:
http://emilyroolearnstorun.blogspot.co.uk/2015/12/barefoot-dancing-at-5000m-british.html 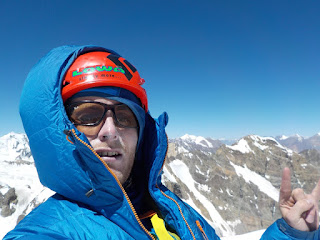 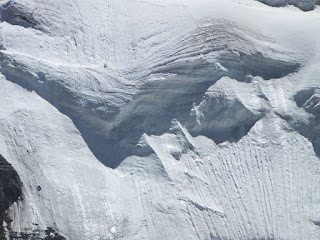 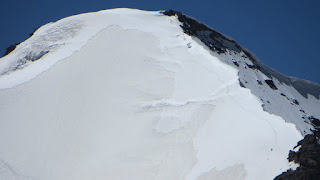 Posted by James Monypenny at 05:30 No comments:

From February until May 2015, I completed a long held ambition to do a winter season in Chamonix. Overall I had a great season and did lot's of Alpine climbing and skiing, with the odd paraglide here and there.  Here's some Photo's to enjoy.... 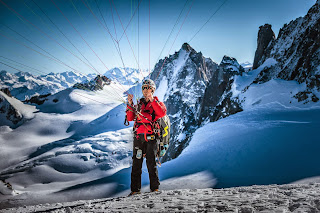 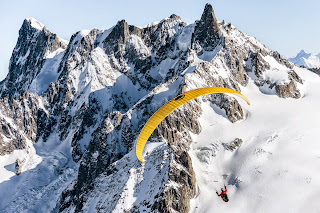 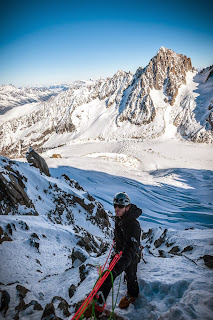 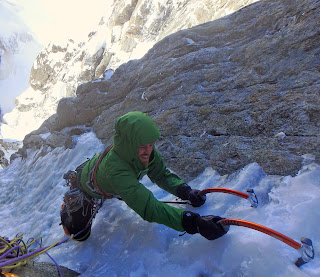 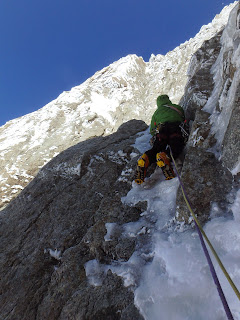 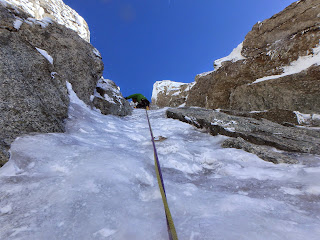 Posted by James Monypenny at 05:49 No comments:

''We are all better than we know, if only we can be made to realise this; we will never again be prepared to settle for less'' -K Hahn 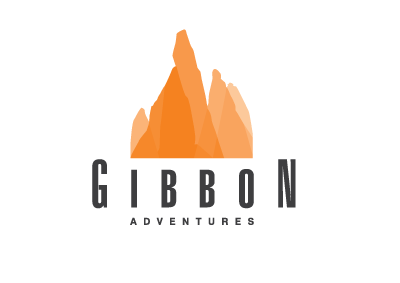 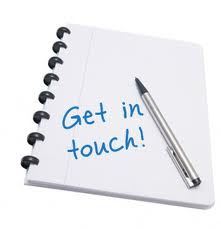